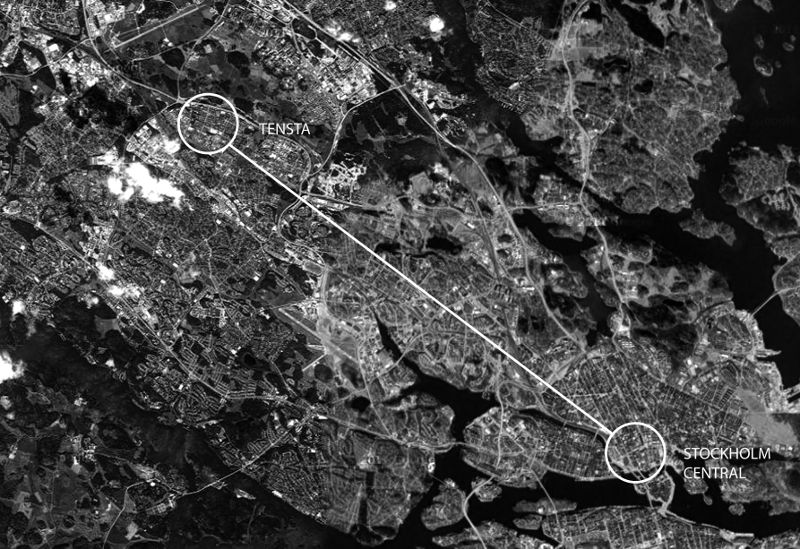 Concept / Theory / Inquiry
The media only comes to Tensta if something is on fire. With the ethnic diversity and low socio-economic status of its inhabitants, as well as several instances of youth riots and arson over the past few years, this Stockholm suburb has developed a reputation as one of the most dangerous immigrant “ghettos” surrounding Järvafältet. Its reputation has further isolated Tensta from central Stockholm, though only a half-hour ride on the subway separates the two; from its origins as a Million Programme development—the 1960’s plan which created entirely new developments containing affordable housing along with most other community needs—Tensta has been conceived as a whole community in-and-of-itself, cut off from its surroundings.

Avfyringsrampe / Launching Ramp takes as its starting point various associations with fire in the area—from the evidence of Viking bonfires and burial mounds in Järvafältet to recent instances of cars and buildings being set on fire in youth riots, still apparent in charred patches on some of the buildings’ sides. Furthermore, the work enters into a dialogue with the two existing sculptures on its site (Samspel and Människans tunnband), both created by Swedish artist Olof Hellström and erected in Tensta in 1987. Born in 1923, Hellström can be considered a classical Swedish artist and both the expression of his Tensta sculptures, as well as their titles, manifest a clear example of the “good intentions” that continue to be forced upon the multicultural community by the Swedish establishment. According to the principal of the local Ross Tensta Gymnasium, he alone receives several offers daily from outsiders wanting to volunteer in the community. The majority of these offers come from ethnic Swedes with a perception of Tensta that is not informed by personal knowledge but rather shaped by media reports of social unrest.

Wooloo aims to intervene into this perceived one-way flow of energy and attention—from central Stockholm into Tensta—by creating a sculpture reminiscent of the recurring phenomenon “blowback” or consequence, yet the sculpture will be a non-violent provocateur intending to engage the public into an open exchange. Avfyringsrampe / Launching Ramp is influenced by the two existing Hellström sculptures, for it will use the same materials (bronze, steel and concrete) to erect a new sculpture where the focus is no longer a specific tradition of Modernist sculptural practice, as expressed by Hellström and others historically embedded throughout Nordic welfare states, but instead: the creation of a sculptural object which questions the intentions of these already existing sculptures by (1) using the same materials (bronze, steel and concrete) which can be perceived in a range of ways (e.g. mimicry, equity, art historical reference) and (2) overriding any previously adopted interpretation of necessity into a more functional, responsive offshoot and metaphorical assertion for the voices of Tensta.

The new sculpture will take specific form as a rocket launcher for large and small fireworks and will in this practical operation question the function of a “good” community art project. Again: fire will be its medium, yet in this function, the work attempts to shift its symbolic meaning, from a marker of destruction into an energizing, igniting force within the community. The physical placement and aiming angle of the rocket launcher will correspond to the direct flight line between the Tensta Subway Station and that of Stockholm Central Station—aiming its missiles at the heart of the capital, while simultaneously pointing at the socio-economic marker of difference symbolized by the distance between these two subway stops. In interacting with the work, as in Tensta’s recent past, the act of setting fire to something remains an act of agency. Here, however, the spectacle is not only presented for Tensta’s inhabitants but for Stockholm’s creative class as well—in this way, reversing the usual formula for those who produce culture and consume it.

How Project Assists valeveil
Wooloo hopes to communicate with those residing in Tensta, Stockholm Proper and its surrounding areas from both an artistic and curatorial perspective; individuals of ranging backgrounds will have a newly designed sculpture and meeting point for lucrative engagement and agency. The project Avfyringsrampe will attempt to examine the pre-existing relationship between Sweden’s capital and its evolving suburban region of Tensta; it intends to redirect energies of Olof Hellström’s existing works into a new sculptural initiative as well as introduce pointed conversations revolving around its experimental construction and theoretical underpinnings. The project will be open to the public. The artists have been specifically commissioned, yet Wooloo’s role as Arrow curators is voluntary. The artists intend to stimulate and enliven these two regions, impelling inhabitants to reassess and question the current flow of information and cultural production, with hopes that motivating approaches and future cooperative methods will surface to earnestly and more aptly unify the areas in question.

About the Arrow Curators
Wooloo is a Danish artist group founded in 2002 by Martin Rosengaard and Sixten Kai Nielsen. Wooloo creates social experiments in collaborative participation, exploring strategies in which several people take a role in the art-making process. In their artistic practice, Wooloo acts as an intermediary: they operate on the level of infrastructure to supply the conditions for social experimentation. To this end, Wooloo has produced U.S. work visas for artists, had artists date each other and organized several site-specific participatory projects in small towns in Europe. Wooloo also operates wooloo.org (2002-ongoing), an online community for participatory projects which connects the resources of more than 22,000 cultural producers internationally. Fundamentally, Wooloo regards “hospitality” as the medium in which they operate.