Concept / Theory / Inquiry
Skål-Salud: Street Stories is a curatorial experiment aiming to explore constructions of otherness and expand communication, beginning with a dialogue between urban artists from two locations: Lima and Stockholm. This construction is not static nor is it exclusive of the interlocutor. Instead, it intends to be an osmotic platform where participants configure an alternative form of contextualization, revolving around their practices with regard to their sociopolitical milieu. The interest lies primarily in urban street artists.

A Global Public Space
This project will generate a virtual, hybridized public space where two artists serve as “ambassadors” for each city. They will engage their peers to become involved and create a representative platform for their stories—as it often is on the streets. Skål-Salud: Street Stories will generate a website serving as a virtual “wall” where artists can be seen and heard. Without being silenced or underground, those involved are encouraged to discuss the politics which affect their behavior and actions.

In Die Traumdeutung, Freud defines the interpretations offered by psychoanalysis as translations from a foreign mode of expression into the one which is known to us, stating that “a dream is a (disguised) fulfillment of a (suppressed or repressed) wish.”1 However, the emancipatory effect that this exteriorization has on the individual has been studied by Habermas in his theories of the public sphere as a space for “self-reflection.” He identifies this self-reflection with translation: translation of the unconscious into the conscious. “In discourses that focus on a shared subject, participants turn their backs on their private lives. They do not need to talk about themselves. The line between public and private spheres does not become blurred; the two complement each other instead.”2

Cutting the Space
Lima is chaotic, crowded and underprivileged. Stockholm is more spacious, controlled and wealthy—or is it? This idea approaches the human problematic. The curator has lived in both cities discovering that desolation, oppression and poverty are strongly felt for many individuals; the presence of these factors grows rapidly on the streets. In Skål-Salud: Street Stories, translation is not merely personal or subconscious; it is also material and often a curator’s role. “Such translation emphasized the inevitability of betrayal, which gnaws at the heart of the difference between the speaker and the translator.”3

The goal of overcoming ingrained differences between participants will be addressed utilizing the tools of friendship and communication. The project’s primary participants (“Blue,” Yonas Millares and Rossana Mercado Rojas) speak Spanish fluently, have shared one beer more than mandatory and their cultural perspectives serve as a catalyst to further examine urban art—street slang inclusive. For instance, a specific word (e.g. hora) is spelled the same in both Swedish and Spanish, but it has different meanings which inspire word play for some urban artists.

Interdisciplinary Input
Skål-Salud: Street Stories does not intend to only present a multidisciplinary result / conclusion but a configuration of dialogues and references originating from multiple languages and codes. This interdisciplinary approach will assist in “cutting the space” between Scandinavia and South America and between practices.

More On the Name
Having a Peruvian background, sharing a beer in a bar was a natural professional meeting form to work and produce. One could be productive in this setting, develop ideas and make them happen. Artists often gather in bars to produce art. In Peru,4 there are no strict closing times nor defined rules for selling alcohol. Alcohol consumption relates to the spontaneous part of the day; people often drink outdoors and play music after a hard day’s work. Yet, alcohol also relates to sickness, to the venom of the poor, forgotten and unheard, making them invisible and unbearable to view. With alcohol, their sorrow is undignified. Therefore, society neglects them; they are seen as pariahs.

Work meetings in Stockholm rarely happen in bars or spontaneously during an evening out. Systembolaget’s weekend shopping ritual differed from the curator’s previous perspective on drinking. Millares once offered Mercado wine from the couch of his piece Monetary World (2011). Since then, they share a goal to create strategies to dissolve icy rules between individuals, between “the people” and an oppressive system which can be a catalyst for injustice. Many urban artists suffer the consequences of practicing in a society such as Stockholm—with high fines and sometimes unavoidable consequences. So, they practice underground and develop behavior, ranging from paranoia to combative or defensive responses. Coming from a Peruvian / Latin-American perspective, a correlation exists between hyper-controlled public spaces and the difficulties poverty presents.

Technique(s)
» Dialogues in a virtual public bar to create topics regarding public space: an artistic platform mirroring socio-cultural factors.
» Millares and “Blue” share musical and visual arts knowledge which will be used to generate an alternative interpretation to contextualize an audience, utilizing not only a museographic approach but also empathy, experience and casual conversation.
» Both artists work with public space, and their art represents a narrative related to their respective societies. Site-specific elements will surface, expanding conversation between two realities to generate a new shared space.
» The exchange will knit an informative web starting with these two realities.
» Two interpretations of each artist’s reality will emerge: visual and musical.
» Using anecdotes and conversation, this project will illuminate legal influences on these urban art scenes and their strategies.

How Does it Work?
“Blue”-Millares-Mercado
» The curator and artists Skype-talk in a staged virtual bar, exchanging ideas for website production.
» The curator sends emails initiating topics in preparation for each virtual bar meeting (e.g. each city’s public space, artist’s connection to their urban art scene).
» One preliminary idea is to generate a video with music by “Blue” and visuals by Millares. A website will display results.

Nodes of Connection
This project has been virtual from the beginning; it will be a platform for each city’s urban art scene. This community portal will host videos, images and conversations uploaded by artists and other participants. “Blue” and Millares serve as nodes of connection to the grouped street artists of Zona 30 and the underground, outlawed artists of Stockholm.

Stockholm-Lima
The project intends to bring Millares and another Swedish street artist to Lima to produce and exhibit work in Zona 30 and collaborate with other collectives; in parallel, an “underground” event in Stockholm will be arranged for “Blue,” and her events will be anonymously live-streamed (in regards to location). This exchange will provide closure, enforcing the idea of this proposed community.

Itinerary
» “Blue”-Millares-Mercado: three months is needed for project development, scheduled for March 2012.
» Nodes of Connection: website launch is scheduled for February 2013.
» Stockholm-Lima: this sub-project is dependent upon many factors; deadline tbd.

How Project Assists valeveil
Skål-Salud: Street Stories is a curatorial approach reaching individuals in Peru, Sweden and elsewhere. The project allows individuals from these two contrasting backgrounds and sociopolitical circumstances to collaborate. This project intends to further examine South American and Scandinavian creativity; there is room for creative experimentation in the field of urban street art in both Lima and Stockholm. The curator and two ambassadors for each region are not anonymous, but additional participants have the right to protect their identities.

In Suzi Gablik’s essay “Connective Aesthetics: Art After Individualism,” the critic argues for a new kind of artist who understands that “the boundary between the Self and the Other is fluid rather than fixed, that the Other is included within the boundary of selfhood.”5 Yet, this statement is contrasted by the differences between Lima and Stockholm, between cultures that will surface while working on this project. The goal is not to generate a merged common space but to identify the identity of each part. This project aims to create a more open discussion based on reconfiguring the individual in the public space. By examining public space as a political sphere which is oftentimes restricted, this project aims to amplify marginalized voices of both cities. Skål-Salud: Street Stories seeks real and direct representation for artists perceived to be underground.

About the Artists / Ambassadors 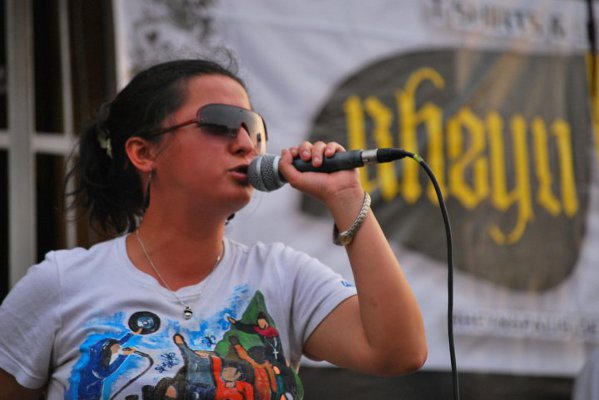 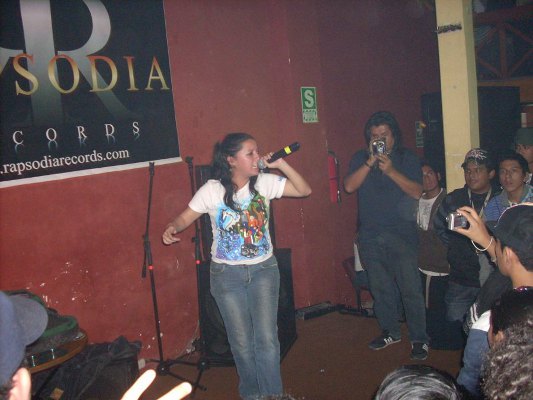 «
»
“Blue” (b. 1986, Lima) is the alter ego of Stephanie Valdivieso who belongs to one of the first all-women street art collectives Maripussy and to HDU (Hermanas del Underground) with two other female rap artists. “Blue” participated in The Lima Municipality Celebration for the Day of Women (2011); she often collaborates with other rappers. Her vivid lyrics highlight women’s struggle and strength in society as in her song “Rosas para Margarita.” She is a strong presence in Lima’s hip-hop and urban art scene, with frequent shows at festivals. 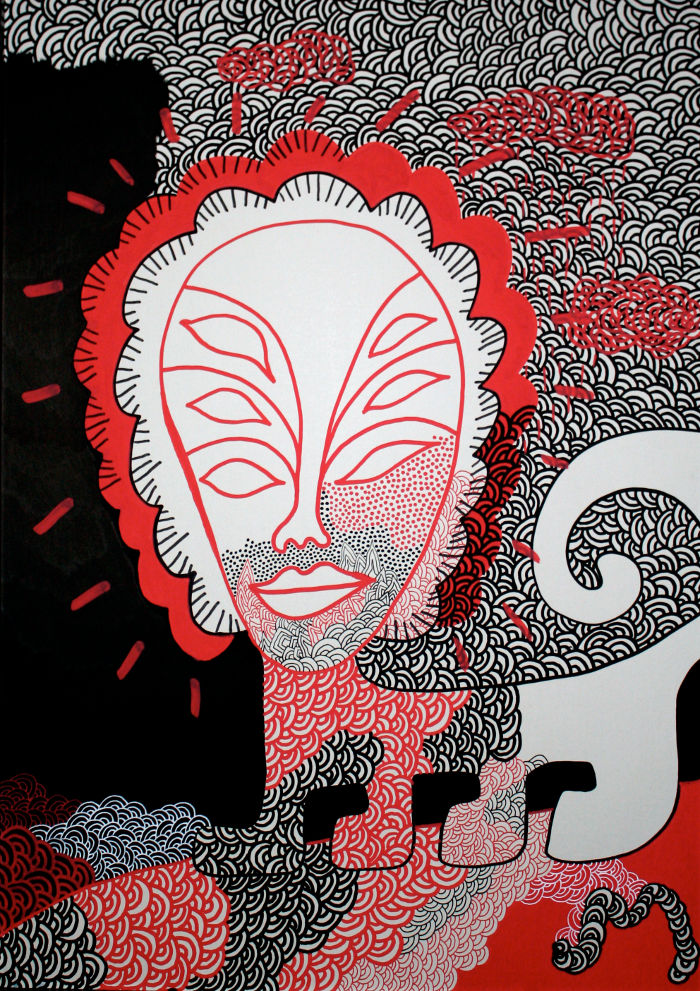 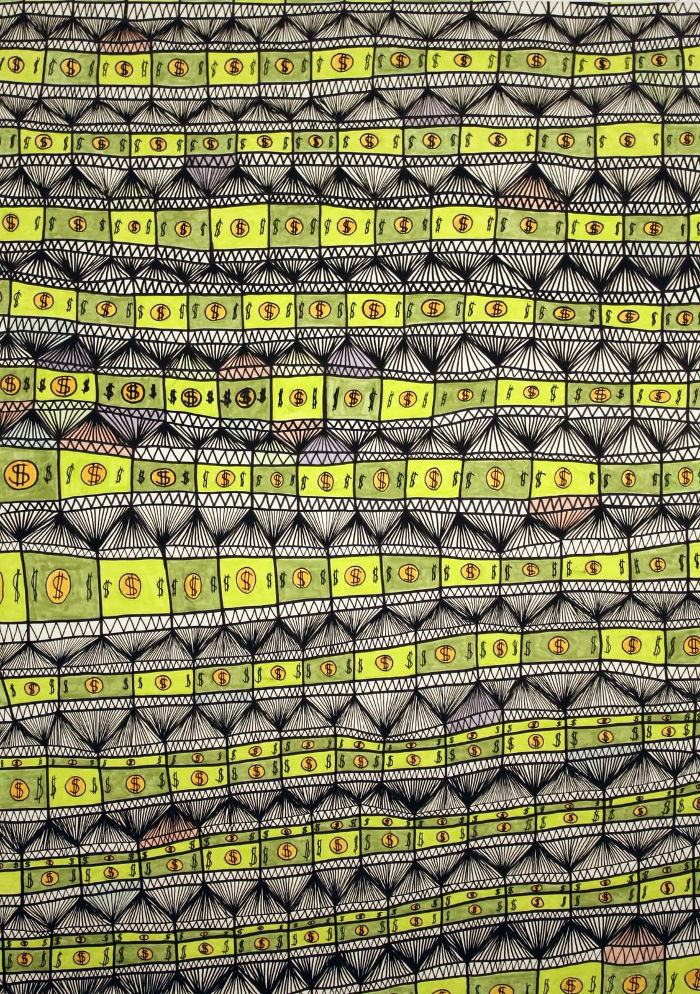 «
»
Yonas Millares is a Sweden-based artist born in Chile. He studied painting at Västerås Konstskola then began researching his Chilean roots. This led to questioning society, regarding power, hierarchies, the monetary system and conflicts: the dualities of life. He later attended Gerlesborgskolan in Stockholm to cultivate his graphical style using symbols and patterns, influenced by activism and Santiago’s colorful street art. At Liljevalchs Konsthall’s 2011 spring exhibition, Millares presented the painting The Monetary System; his first solo show at Pony Sugar was “Exxpreción Libre.” Millares uses his exhibitions as a reflection and dialogue space to display art which mirrors the audience that he wishes to both communicate with and attract. In The Monetary World, 2011, he publicly staged a couch removed from the subway to be painted. Reuse of material once used by a wealthy corporate entity presented the audience with a new message; the couch was adorned with sentimental, dense colors denoting strength—expressing the Chilean-Mapuche search for identity. Wine in hand, sitting on this couch during his exhibition “Exxprecion Libre,” Millares invited each passerby to talk with him, invalidating the notion of the shy exchange student, immigrant or law-silenced street artist in Stockholm. He has a B.A. from Konstfack University College of Arts, Crafts and Design.

About the Arrow Curator
Rossana Mercado Rojas (b. 1982, Lima) is an artist and curator. She has been developing projects with Peruvian and European artists to investigate translation forms, (re)creating hybrid contexts generating dialogue between dissimilar societies—stretching curatorial and artistic roles. For her M.A. thesis, she worked with urban knitting in different socio-geographical circumstances, collaborating with art collectives Stickkontakt (Sweden) and C.H.O.L.O. (Peru). Other projects include: Medium Rare (Sweden, 2009)—in collaboration with Foro Latino, SAL (Latinamerikagrupperna) and FIANSverige—and the curated exhibition “Buitre: de Bulimias y Carroñas” (Lima, 2009). She is currently working on projects in Lima focusing on literature, social science and pedagogy. Mercado holds a B.A. from the Pontifical Catholic University of Peru in the Arts (2008) and is expecting a M.A. from Konstfack University College of Arts, Crafts and Design in Curatorial Practice (Stockholm).

Additional Collaborators
» Zona 30 (Peru) is an artist residency and platform for experimentation processes. Within a period of 15 days, the artist Yonas Millares will be installed in the space to present a work in progress, workshops and talks. The project is process-based. Zona 30 is open to collaborations joining fellow artists, researchers, activists, friends and strangers. There are no site-specific prerequisites but investigative ones for Zona 30.

1. Sigmund Freud, The Interpretation of Dreams, 3rd edition (New York, NY : Macmillan, 1913), 1.
2. Public Space and Political Public Sphere: The Biographical Roots of Two Motifs in My Thought. 11 November 2004. <http://homepage.mac.com/gedavis/JH/Kyoto_lecture_Nov_2004.pdf>.
3. Gayatri Chakravorty Spivak, “More Thoughts on Cultural Translation.” European Institute for Progressive Cultural Policies. April 2008. <http://eipcp.net/transversal/0608/spivak/en>.
4. Based upon both my experience and Yonas’s, bar opening hours and the regulation of alcohol consumption are similar for many Latin-American countries.
5. Suzi Gablik, “Connective Aesthetics: Art After Individualism” in Mapping the Terrain:
New Genre Public Art, ed. Suzanne Lacy (Seattle, WA : Bay Press, 1995).
6. In Peru, urban art is closely linked to arte popular (connected to identity, opposed to academic paradigms). It is related to the Mestizo culture and the aesthetics of combining the countryside with urban culture.