WikiLeaks contains an overwhelming amount of language. The language overwhelms. I find it hard to describe certain events because I was not there. I did not witness the events firsthand, but I witness the overwhelming amount of language that surrounds those events. The language is present everywhere, before and during and after and during still. The language is archived, analyzed, read, taken apart, hidden and stored. I witness these events through language. Too, the language is representative of a state. The language leaks from one place to another, to a place where there is already an overwhelming amount of language. There are those who witnessed such events firsthand, who tried to cause certain events and were found with limited resources to accomplish these tasks. There is a journalist who wanted to take a picture of the rainbow but was unable to because of the quality of his mobile phone. I do not see the same rainbow; I see another. I also see the word for rainbow. Because of the many difficulties I already found myself mired by, I too limited my resources, limited the tools at my disposal, namely language. In this poem, I work with a limited amount of language, or, a limited vocabulary. With this vocabulary, I can say many things. But with this vocabulary, there are many other things I still cannot say. This is the state of language, the state of a revolution, the state of WikiLeaks. 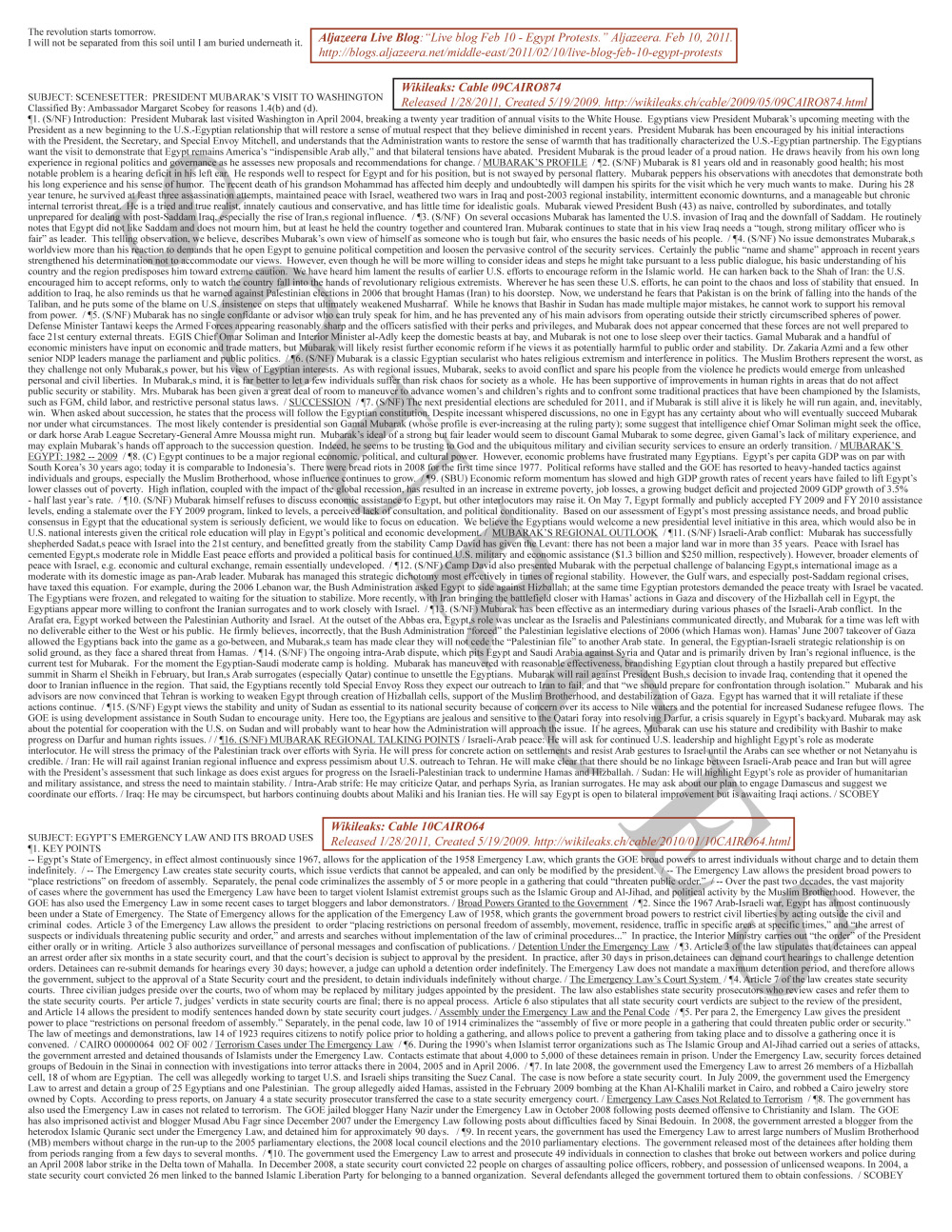 Is it tomorrow on the doorstep?

I can hear his hands, hands of the proud leader of a proud nation
His hands do not affect God
But God is operating from outside the spheres of lament
Has the role as moderate interlocutor and is jealous and sensitive
We should prepare for confrontation through isolation
God is convinced of tomorrow

He is one of many surrogates
Consider that Egypt continues to be a major regional, economic, political, and cultural power
Because bread continues to grow
Because of the conditionality of hands
Because the potential for access grows into tomorrow

The next presidential elections are scheduled
If Mubarak is still alive it is likely that he will run again
There were bread riots in 2009 for the first time since 1977
Tomorrow is a new initiative, a new conditionality
The doorstep is perceived to be heavy

If the revolution starts tomorrow
How do you suggest we coordinate our efforts?
What is our plan for tomorrow?

It will retaliate if these actions continue
What is it?
What is the image of tomorrow?
They are in a game of go-between
They expect to fail

They expect to open the door
But the doorstep is heavy

Bio
Janice Lee is a writer, artist, editor and curator. She is interested in the relationships between metaphors of consciousness, theoretical neuroscience and experimental narrative. Her work can be found in Big Toe Review, Zafusy, antennae, sidebrow, Action, Yes, Joyland, Luvina, Everyday Genius, elimae, Black Warrior Review and elsewhere. She is the author of KEROTAKIS (Dog Horn Press, 2010), a multidisciplinary exploration of cyborgs, brains, and the stakes of consciousness, Daughter (Jaded Ibis, 2011) and a chapbook Red Trees. She holds an M.F.A. in Creative Writing from the California Institute of the Arts and currently lives in Los Angeles where she is co-editor of the online journal [out of nothing] and co-founder of the interdisciplinary arts organization Strophe.